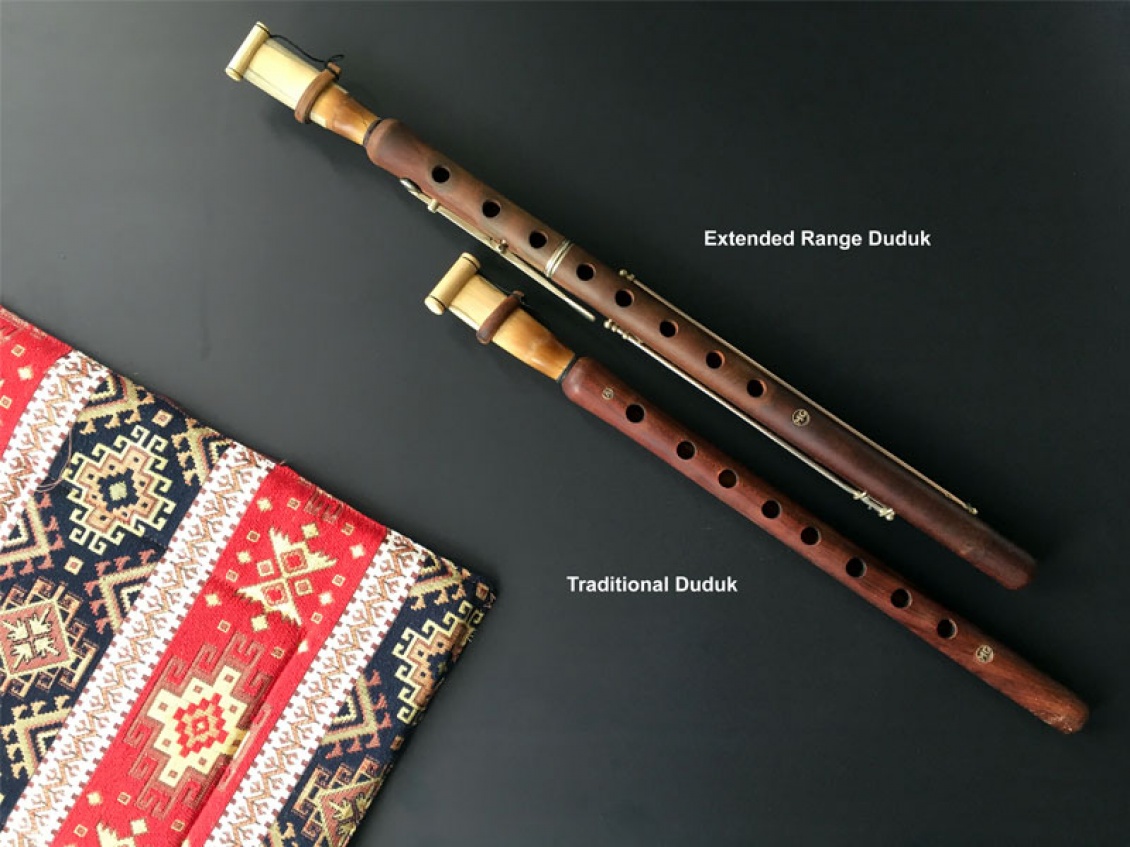 The duduk (doo-dook, դուդուկ) is an ancient double-reed woodwind flute made of apricot wood. It is indigenous to Armenia. It is commonly played in pairs: while the first player plays the song, the second plays a steady drone, and the sound of the two instruments together creates a richer, more haunting sound.

The unflattened reed and cylindrical body produce a sound closer to the English horn than to more commonly known double-reeds. Unlike other double reed instruments like the oboe or shawm, the duduk has a very large reed proportional to its size. UNESCO proclaimed the Armenian duduk and its music as a Masterpiece of the Intangible Heritage of Humanity in 2005 and inscribed it in 2008. Duduk music has been used in a number of films, most notably in The Russia House, Ronin and Gladiator. Variations of the duduk exist in Eastern Europe, the Middle East and Central Asia.

The duduk is a double reed instrument with ancient origins, having existed since at least the fifth century, while there are Armenian scholars who believe it existed more than 1,500 years before that. The earliest instruments similar to the duduk’s present form are made of bone or entirely of cane. Today, the duduk is exclusively made of wood with a large double reed, with the body made from aged apricot wood.

The reed (Armenian: եղեգն, eġegn), is made from one or two pieces of cane in a duck-bill type assembly. Unlike other double-reed instruments, the reed is quite wide, helping to give the duduk its unique, mournful sound, as well as its breath requirements. The duduk player is called dudukahar (դուդուկահար) in Armenian.

The performer uses air stored in his cheeks to keep playing the instrument while he inhales air into his lungs. This “circular” breathing technique is commonly used with all the double-reed instruments in the Middle East. Duduk is invariably played with the accompaniment of a second “dam” duduk (drone), which gives the music an energy and tonic atmosphere, changing the scale harmoniously with the principal duduk.

Duduk family includes instruments in different keys, such as in C, B, A, G, E, D and F.

Before you begin it is very important to correctly open the reed. When you receive your reed, generally the mouth of the reed will be closed. Before starting the primary exercises, it is necessary to get the instrument ready for playing by applying several drops of water inside the reed, empty it, and then to close the cap for 15-20 minutes before playing. Please be careful not to open the mouth too wide as it will result in incorrect pitch.

Important Note: Play your new reeds every day for at least 3-6 month so that they reach their optimum performance. New reeds are generally tough in the beginning and can be played only for a short period of time (around 20-30 minutes). Don’t be discouraged if you start playing and discover that the reed is tough. Keep playing, even it is for 10-15 minutes each day. More you play, better it will become.

Learning the correct breathing skills from the beginning are essential. The in-breath should be quick and deep, the out-breath slow and steady. There are three types of breathing:

The student should practice the mixed type of breathing. This type differs profitably from the other types of breathing as it allows to intake more air, and therefore assists in the achievement of better sound and freer play.

Caring for your reeds & duduk

After you finish playing it is important to remove the reed from duduk body, ease the reed tension by moving the regulator all the way to the cap. Store your reeds in a well ventilated case to allow for excess humidity to escape. In general, a sunglass case with several drilled holes will do the work.